Background: BDV causes immunopathology of the central nervous system in many animal species. Detection is based on serology and PCR. Due to low viremia, it is hard to detect and antibodies are found only in 0.5% of the human population.Â  Evidence suggests an association of viral infection with disorders like bipolar disease and schizophrenia. Methods and Findings: We developed a Real Time RT-PCR for BDV p40 and p24.Â  A total of 212 horses were tested, 18 resulted positive for BDV RNA.Â  A group of 76 human samples were also tested: 51 bipolar patients and 25 healthy volunteers. Five bipolar patients were positive for p24, three were positive for p40 and one was positive for p40 strain No98. All healthy donors were negative. Conclusions: BDV detection is reported for the first time in Costa Rica.Â  Although the number of samples tested was low, a high incidence was observed in horses and a strong association in humans with bipolar disease is suggested.

Borna Disease was described more than 200 years ago in South Germany as a fatal neurological disorder in equines and ovines [1,2].

Borna Disease Virus (BDV) is associated with abnormalities in the development of brain structures [3, 4]. Behavioral studies in animals infected with BDV suggest that some neurologic disorders could be associated with this virus [2, 5].

BDV is a member of the Mononegavirales, Bornaviridae family. It is a non-cytolytic, non-segmented, enveloped virus with a negative-sense RNA genome [6]. It has a spherical morphology 70 to 130 nm in diameter, with a dense internal core (50-60 nm) and an external membrane with 7 nm long spicules [7-10].

The BDV genome (~8.9 kb) is typical of the Mononegavirales. It has six open reading frames (ORF) that code for several polypeptides: p40, p24, p10, p16, p56 and p180. p40 corresponds to the viral nucleoprotein (N) and p24 to the phosphoprotein (P) [9,11, 12] Gene X codes for a nonstructural protein that interacts with the P cofactor of the viral polymerase, it inhibits apoptosis and promotes viral persistence [11, 13-15].

In Central Europe, neurological disorders have been observed in horses, sheep and other farm animals infected with BDV. The neuronal cells of several species can be infected in vitro with BDV; however, rats are the most susceptible animal. Neurological symptoms are the result of the immune response against persistently infected CNS cells [6, 19, 20].

It is tempting to speculate that BDV might be linked to some psychiatric disease syndromes such as affective disorders (depression, psychosis, schizophrenia) and to idiopathic acute or chronic encephalitis. In the 1980s, the first significant serological evidence for BDV human infection was reported. However, despite more than two decades of study reporting serological, pathological and virological evidence of BDV infection in humans, medical and scientific acceptance of the human as a natural target of BDV is still uncertain [2, 5].

Due to few circulating particles, BDV is very difficult to detect in blood samples. It is estimated that approximately 1 cell is infected in 105-106 mononuclear cells. Real Time PCR has enough sensitivity to detect this virus [5, 21].

We developed a Real Time PCR for BDV detection, it is based on main antigens p40 and p24. It was applied for the first time in Costa Rica in equine and human samples.

Extraction of cellular and viral RNA from leukocytes

Leukocytes were isolated by centrifugation in a Ficoll® cushion for 30 min at 900 g. The leukocyte layer was extracted, washed and suspended in PBS.

A QIAamp® RNA Blood Mini Kit (QIAGEN) was used for extraction according to the procedure recommended by the fabricant.

A RevertAid H Minus First Strand cDNA Synthesis Kit (Fermentas ®) was used for reverse transcription according to the procedure recommended by the fabricant.

The plasmid pGEX-5x-3 was kindly provided by Dr. Fernando Puerto, University of Yucatán, Mexico. The construct (inserts for p24 and p40) was maintained in the Escherichia coli strain BL21. Cultures were grown in LB (Luria-Bertoni) Agar Amp (50 mg/ml ampicillin, Fermentas®) and then in liquid LB (LB Liq Amp Fermentas®).

Plasmid DNA was extracted by alkaline lysis [24] and the concentration was estimated by fluorometry.

A final point TaqMan Real Time PCR (Plus Minus Assay) was used to detect BDV RNA in blood samples. Primers and probes were designed for p24 and p40, based on consensus sequences for Borna V, Borna HE/80, and Borna H1766. Probes and primers for Borna No98 were designed separately because this strain has only 80% homology with the others. (Table 1). 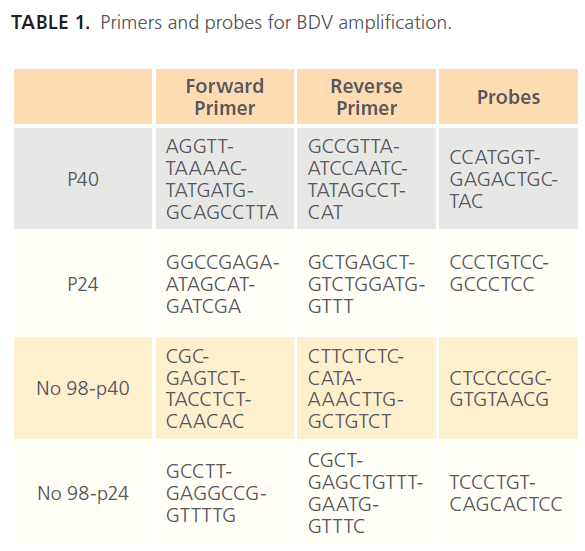 The probes were labeled at the 5’ end with a FAM (6-carboxyfluorescein) reporter. Primers and probes were produced by Applied Biosystems®.

A Real Time Assay was run in an ABI 7500 PCR System, (Applied Biosystem®).

For each amplification reaction, 10 ml of TaqMan Universal ® PCR Master Mix, 1 ml of 20X assay mix (probe and primers) and 9 ml of cDNA diluted in RNase free water were mixed. Conditions for PCR were: 10 minutes at 95ºC to activate the polymerase, followed by 40 cycles, 15 seconds denaturing at 95ºC and extension at 60ºC for 1 minute. The sensitivity of the assay was determined using 107 to 101 molecules per reaction of p40 and p24.

A BLAST alignment with the GenBank Database (www.ncbi. nlm.nih.gov) was run to determine the theoretical specificity of primers and probes.

Through an estimation of the number of plasmid copies, we determined that the dynamic range for p24 was 102. After the Ct 40 the results were not reliable.

Similar results were obtained for p40, with a dynamic range of 103. In the case of Borna No-98 p24 and p40, a standard curve was not carried out because this sequence is different from the other virus strains and from the p24 and p40 inserts in the plasmids.

The specificity of the reaction was determined through BLAST alignment of the real time PCR products with nucleotide sequences from the GenBank (www.ncbi.nlm.nih.gov). This revealed that these sequences are unique for BDV. 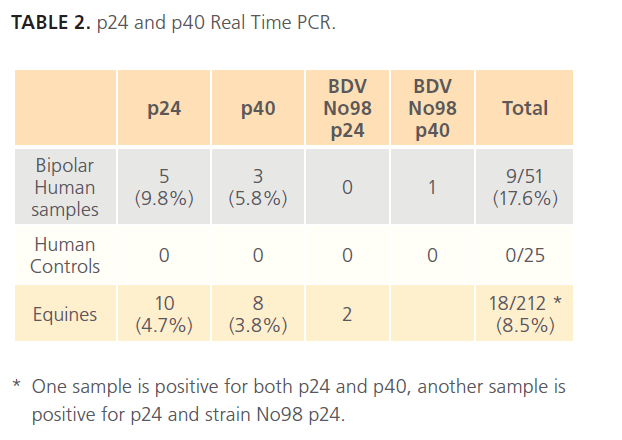 The PCR products were sequenced on an ABI 3130 (Applied Biosystem). The Real Time PCR products were expected to be approximately 120 bp for p24 and 105 bp for p40. After sequencing we obtained products between 61 to 80 bp, which were aligned (BLAST) in the Gen Bank (www. ncbi.nlm.nih.gov) and similarity was only seen with BDV (93 to 100% similarity). However, the size of the sequences is small, automated systems usually lose 50 to 100 nucleotides at both ends, and sequence reagents can not be altered to improve efficiency.

BDV infection yields low viremia and attacks mainly the central nervous system. There are several methods described to detect BDV, but sensitivity is a key factor. Serology has low sensitivity due to low levels of BDV antibodies; therefore, molecular methods are being developed in several laboratories worldwide.

This report describes the standardization of a Real Time RTPCR to detect BDV.

When used with dilutions of the plasmids with the p24 and p40 inserts, the technique detected as few as 100 copies; however, the technique is able to detect fewer molecules.

Interestingly, differences were observed in the relationship between p24 and p40, which varied according to the infection course. Schneider and collaborators report in the acute phase, p40 levels were higher, while in persistent infections p24 levels were increased. [25, 26].

Virus replication occurs when the antigen p40 expression is 30 fold higher than antigen p24. The transcription ratio does not affect polymerase activity. Several studies suggest that the p24: p40 ratio is critical for the regulation of viral replication [10, 25]. These results are in agreement with the observation that most positive horses express p24 in correlation with persistent infections [25].

BDV RNA was detected in 8.5 % of the healthy horses in this study. This appears to be a low percentage compared with reports from Europe. Berg et al in 1999 reported a seroprevalence of 24.5% in healthy horses and 57.7% in horses with neurological signs; however, serology detects previous viral infections and PCR detects only acute infections [27].

Most of the positive horses in this study were from Guápiles County, where bovine, equine and swine farms are common. This fact suggests that infection is endemic and that the virus was probably transmitted from horse to horse.

Positive bipolar patients ranged in age from 30 to 75 years and had been hospitalized several times, suggesting a relationship between the virus and the persistence of symptoms, or the possibility of virus transmission within the hospital. This findings could have important implications in epidemiology and etiology of neuropsychiatric disorders. In Latin America studies on BDV are scarce. This is the first report of BDV in humans and equines in the Central American region.