Cryptococcal Meningitis in People Living with HIV (PLHIV): A Comparative Analysis of the Diagnostic Tests

Background: Cryptococcal meningitis (CM) is associated with a high mortality rate among people living with HIV (PLHIV). CM often presents with subtle features delaying the diagnosis. The diagnosis of CM can be challenging, especially with limited access to the newer diagnostic techniques. This study compared the utility of various tests in the diagnosis of CM in a resource constrained setting.

Conclusions: CM can present with subtle findings- about 1/3rd patients do not have classical features of meningitis. Patients tend to present late; the paucity of CSF abnormalities further delays the diagnosis. India ink staining is useful in diagnosis in only 2/3rd of cases. Even though LAT is more expensive it should be the preferred diagnostic modality. Early clinical suspicion and antigen detection tests are recommended for the early and timely diagnosis of CM.

Cryptococcal meningitis (CM) is the most common central nervous system fungal opportunistic infection among people living with HIV (PLHIV). The annual incidence of CM is about one million cases a year and accounts for nearly 500000 deaths in sub Saharan Africa alone [1]. CM is associated with high case fatality and the 2-week mortality ranges from 35% to 65% in various studies even under optimum treatment conditions [2, 3]. The mortality rates are higher in the resource limited settings like Africa and India where the diagnosis is often delayed due to a combination of reasons: a lack of classical clinical features delaying clinical suspicion and inaccessibility of newer diagnostic techniques. The limited availability of Amphotericin B based treatment further contributes to increased mortality. The life expectancy of those who survive the initial episode of CM is very low due to secondary complications. With the availability of antigen based tests, the diagnosis of CM has become very easy and quick in the developed countries. The costs of these tests remain an important issue to be addressed in resource limited settings. The present study assessed the clinical spectrum of CM and compared the newer tests with the conventional tests for the diagnosis of CM.

This observational, descriptive study was conducted in the Department of Medicine and ART centre at the Maulana Azad Medical College and associated Lok Nayak hospital, New Delhi, India, a public health tertiary care facility, from October 2011 to April 2013. The study was approved by the Institutional Ethics Committee and subjects were recruited after prior informed consent. All PLHIV with history and/or clinical examination suggestive of chronic meningitis were evaluated for CM. Subjects with diabetes mellitus, malignancy, any end- organ failure or subjects taking cytotoxic agents and/or steroids were excluded. After a detailed clinical assessment including a neurological evaluation, all subjects underwent a lumbar puncture after a noncontrast CT scan of the head. Cerebrospinal fluid (CSF) collected was sent for cytological, biochemical and microbiological analysis.

The subjects were defined as a case of CM if they were symptomatic and fulfilled any one of the three criteria on CSF analysis:

2. A Positive Latex agglutination test (LAT) for detection of capsular antigen in CSF. LAT was performed after collecting CSF supernatant by centrifugation at 1500 rpm for 15 minutes. The supernatant was heated in boiling water for 5 minutes. One drop of the supernatant was placed on the disposable card and 30 μL of CSF was added and the card was rotated at 100 rpm in a rotator. The card was read after 2 minutes and was considered positive if visible clumping was seen.

3. Isolation of Cryptococcus by culture of CSF in Sabouraud Dextrose Agar (SDA) at 22 and 37°C.

25 subjects fulfilling the case definition were enrolled in the study. They were further assessed with laboratory tests and MRI brain imaging. Treatment was given according to standard national protocol with Amphotericin B based induction phase (0.7 - 1.0 mg/kg) of 2 weeks, followed by consolidation and maintenance phases. The clinical features, findings of CSF analysis and laboratory parameters were analysed in the patients. A comparative assessment of the various microbiological tests for the diagnosis of CM was done. All subjects were followed up for 10 week to assess mortality. The descriptive data is presented as mean with standard deviation for continuous variables and as proportions for categorical variables.

The mean age of subjects with CM was 37 ± 11.25 years (range- 21-58 years), 88% subjects were men, 12% were women and the majority of subjects were unskilled workers -36% subjects. The primary mode of HIV acquisition based on their self-reported history was heterosexual (64%), IV drug use (8%) and in 20% subjects, both IV drug use and heterosexual promiscuity and high risk behaviour. Suspected infected blood transfusion was reported by 8% subjects.

Headache was most common presenting symptom of CM. It was found in 92% (23/25) of the subjects and most of them had severe headache. Vomiting (68%), fever (44%), and altered consciousness (36%) were the other prominent symptoms in the subjects. Seizures (20%), aphasia, focal neurological deficits and bilateral hearing loss (4% each) were also found. The mean duration of the symptoms is summarized in Table 1. Neck rigidity was the most common finding on neurological examination seen in 88% (22/25) subjects. The other neurological signs observed are summarised in Table 2.

Table 1: Duration of symptoms of CM in the study subjects.

All subjects underwent a lumbar puncture and CSF was collected for cytological, biochemical and microbiological analysis. The CSF was evaluated for isolation / identification of Cryptococcus by India ink examination, LAT and culture on Sabaraoud’s Dextrose agar (SDA). Additionally, blood and urine were cultured for Cryptococcus in all subjects. The rates of detection of Cryptococcus by the various tests are depicted in Figure 1. The CSF latex agglutination test was most sensitive test to detect Cryptococcus species and was positive in 100% (25/25) of subjects. Culture of CSF demonstrated Cryptococcus in 64% (16/25) of cases. However, the India ink examination was positive in only 60% (15/25) of subjects. 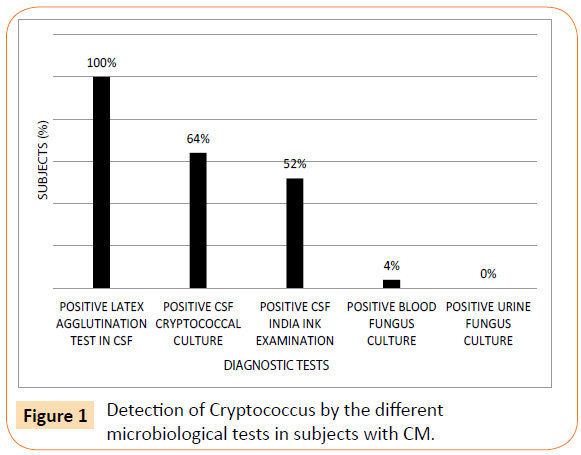 Figure 1: Detection of Cryptococcus by the different microbiological tests in subjects with CM.

All study subjects underwent Magnetic Resonance Imaging (MRI) of the brain during hospital stay. A normal MRI scan was seen in 28% (7/25) of subjects. In all the others, there was a demonstrable abnormality on the MRI. The most common MRI finding was leptomeningeal enhancement, found in 24% (6/25) of subjects. Cryptococcomas were observed in 20% subjects. The other MRI brain findings included prominent Virchow Robin spaces (16%), hydrocephalus (16%), infarcts (12%) and encephalomyelitis (4%). Though MRI findings were common, none were specific for CM and were similar to findings seen in other chronic meningitis like Tubercular meningitis.

The mean CD4 count of the study subjects with CM was 87 ± 66 cells/mm3 and 68% subjects had CD4 count < 100 cells/mm3. Other previous studies have also demonstrated that low CD4 counts are associated with higher incidence of CM among PLHIV. The mean / median CD4 counts in previous studies have varied from 27 to 143 [4,5]. On further analysis of the study subjects, it was observed that the mean CD4 counts in the ART naive patients was 29 cells/ mm3 reflective of the advanced degree of immunosuppression in these patients. This also is indicative of the late presentation and diagnosis of HIV infection in the developing countries like India. The mean BMI of the study subjects was 21.28 ± 3.65 kg/m2 and 36% of them were undernourished i.e. had a BMI < 18.5 kg/m2. The subjects on ART had higher weight and BMI compared to the pre- ART subjects (23 kg/m2 versus 20 kg/m2) though this was not statistically significant.

Headache was the most prominent clinical manifestation among the study subjects (92%) and the median duration of headache was 24 days. In 8/25 patients, headache was present for more than 1 month. Fever of low grade was seen in 64% subjects with mean duration 19.8 ± 11.8 days. The classical signs of chronic meningitis were seen in only 2/3rd of the patients. Similar findings have been reported from other studies in Africa [6]. This emphasizes the need for a high index of suspicion of CM among PLHIV and an early lumbar puncture with CSF analysis are recommended.

MRI of the brain was performed in all subjects. Seventy six percent of the study subjects had an abnormal MRI brain at presentation. Leptomeningeal enhancement was most the common finding (24%), followed by Cryptococcomas in 20% and prominent Virchow Robin spaces in 16% of the subjects. In a study by Miszliel et al. on MRI findings in 25 subjects of CM, prominent Virchow Robin spaces were seen in 40% of the subjects [7]. On a repeat MRI in these patients, 9 had converted into Cryptococcomas. Mathews et al. in his study in patients with CM demonstrated that all patients had an abnormal MRI brain scan [8]. Though none of the findings are diagnostic or specific of CM, MRI of the brain provides good corroborative evidence. This is important to keep in mind since Tubercular meningitis is a close differential diagnosis to CM and its endemicity and prevalence are also high in the same regions.

On microbiological analysis of CSF, India ink staining identified Cryptococcus in 60% of the study subjects. The reported India ink positivity in previous studies has been reported between 60 to 92%. Prolonged storage of the CSF sample, improper specimen transport and expertise of lab, has all been implicated but the exact cause is unknown. The India ink staining of CSF is widely used, especially in resource limited settings, as it is relatively inexpensive, easily available and requires little technical expertise of the lab. CSF culture was positive in 64% of the subjects and all isolates were Cryptococcus neoformans var. neoformans. A higher culture positive rate is indicative of a higher fungal burden in our study subjects. The latex agglutination test (LAT) for detection of Cryptococcus antigen was the most sensitive test to diagnose CM, being positive in the 100% of the study subjects. This corroborates with findings of other studies. Capoor et al. from India showed that the CSF latex agglutination test was 100% sensitive in detecting CM [10]. A similar very high sensitivity of Cryptococcal antigen detection has been reported in other studies [11].

The detection of Cryptococcal antigen in the CSF has emerged as the diagnostic test of choice in CM. It is a very sensitive and specific test. False-positive Results may rarely occur with infections with Trichosporon, Stomatococcus and Capnocytophagus species. Other rare causes include disinfectants and soap [12]. False negative CrAg Results have been described in patients with very low fungal burden and due the phenomena of prozones and immune complex formation [13]. The National AIDS control programme in India relies on and recommends India ink staining as the preferred test for the diagnosis of CM. In view of the numerous advantages and much higher sensitivity, the programme should now consider recommending antigen detection in CFS routinely for the diagnosis of CM. This is even more so required in countries like India where Tuberculosis is endemic. The clinical presentation of CM is identical to tubercular meningitis, and a strong index of suspicion for the diagnosis of CM is essential. In fact among our study subjects, 12% were already receiving anti tuberculosis treatment for suspected tubercular meningitis and presented with worsening of clinical symptoms. These Results in a delay in diagnosis and relying on a less sensitive test such as India ink staining will further compromise the chances of a correct diagnosis of CM, contributing to increased mortality.

To conclude, CM is a serious opportunistic infection among PLHIV. It usually presents as a subacute to chronic meningitis but in about a third of patients, neurological examination may be unremarkable. A CSF analysis is crucial for the diagnosis of CM. Cryptococcal antigen detection is the most sensitive test for the diagnosis of CM and should be adopted as the diagnostic method of choice by India’s national programme.