Comparative Study on Serodiagnostic Techniques of Brucella Infection in Egypt

1Department of Microbiology and Immunology, Faculty of Pharmacy, Modern Sciences and Arts University

Background: Brucellosis is a zoonotic disease that affects wild and domestic animals causing a decrease in reproductive efficiency and abortion and can be transmitted to human. The incidence of human disease is closely tied to the prevalence of infection in animals and considered as an important health problem in Egypt.

The genus Brucella is aerobic, facultative intracellular, Gram negative coccobacilli [1]. The main pathogenic species worldwide are B.abortus, B.melitensis and B.suis which cause abortion in their natural hosts resulting in huge economic losses. They also account for most cases of human brucellosis [2]. Brucellosis is a zoonotic disease that is widely distributed throughout the developing world and has been recognized as a global problem of wild and domestic animals causing a decrease in reproductive efficiency and abortion [3]. The incidence of human disease is closely tied to the prevalence of infection in animals with half a million of new human cases reported annually worldwide [4] and considered as an important health problem in Egypt and an important cause of acute febrile illness (AFI) [5-7]. Diseased animals excrete Brucella through the urine, milk, placenta and the products of miscarriages. In this way, the bacteria disseminated and infect other animals and humans [8]. Transmission of the infection to humans occurs following direct contact with infected animals and their secretions during septic abortion or at the time of slaughter. Infection can occur via injured skin, inhalation or inoculation into the conjunctival sac of the eyes. Foodborne infection is more frequently via the ingestion of unpasteurized dairy products [9-11]. Acute signs and symptoms of human brucellosis mainly include undulating fever, sweats, headache, myalgia, anorexia, back pain, fatigue and other clinical manifestations such as splenomegaly, hepatomegaly and spondylitis [12]. Complications of human brucellosis may include infective endocarditis [13], splenic, liver and pulmonary abscesses [14] with splenomegaly or hepatomegaly [15], osteoarticular manifestations, genitourinary complications, neurological findings, mucocutaneous manifestations [16], deep vein thrombosis [17], meningitis [18], nephritis [19] and ocular manifestations [20]. Brucella bacteremia can result in abortion in pregnant women, especially during the early trimesters. Abortion is a frequent complication of brucellosis in animals, where placental localization is believed to be associated with erythritol, a growth stimulant for Brucella [21]. Although not routinely diagnosed, brucellosis is reported in all domestic animals in the Near East region, including Egypt. The highest incidence of human brucellosis is reported in Saudi Arabia, Iran, the Palestinian Authority, Syria, Jordan, and Oman. The most common Brucella species reported in Egypt is B.melitensis [22]. In this article, a number of serodianostic techniques were used for detection of Brucella infection among humans and different animal species. The percentages of disease detection of the applied tests among investigated cases were calculated and provided.

Blood specimens were obtained from 68 patients from Abbasia Fever Hospital (25 patients) and different private laboratories (43 patients) who showed suspected brucellosis, depending upon history and/or clinical signs as well as from different investigated animals, both apparently healthy animals and suggestive infected cases (suffering from abortion), from different farms. These investigated animals comprised 76 buffalo (1 herd), 145 cattle (3 different herds) and 191 sheep (2 different herds). For clinical specimens, the treatment/ therapy history was not considered during specimens collection since the study focused primarily on serodiagnosis of suspected cases and not concerned with the impact of therapy on the incidence/prevalence of brucellosis. While in case of animals, the infected ones after establishment of diagnosis are killed and no treatment/therapy is recommended.

Blood specimens were transferred to sterile dry vacutainer tubes which were left at room temperature for about one hour to facilitate blood clotting before they were transferred to the laboratory. In the laboratory, vacutainer tubes were kept in refrigerator (4°C) overnight to help serum separation and the clear sera that oozed from the clotted blood specimens were aspirated by sterile Pasteur pipettes and put in sterile screw capped tubes to be stored in the deep freezer (-20°C) until being tested. For some blood specimens, centrifugation at 3000 rpm for 10 minutes was applied to obtain clear sera.

The sera of blood specimens were first screened by RBPT and those giving negative results were discarded, whereas sera giving positive reaction were retested by the SAT, EDTA modified SAT and rivanol test to determine their titers. RBPT, SAT and rivanol test were carried out as described by Alton et al. [23] and EDTA modified SAT was done as described by MacMillan and Cockrem [24]. 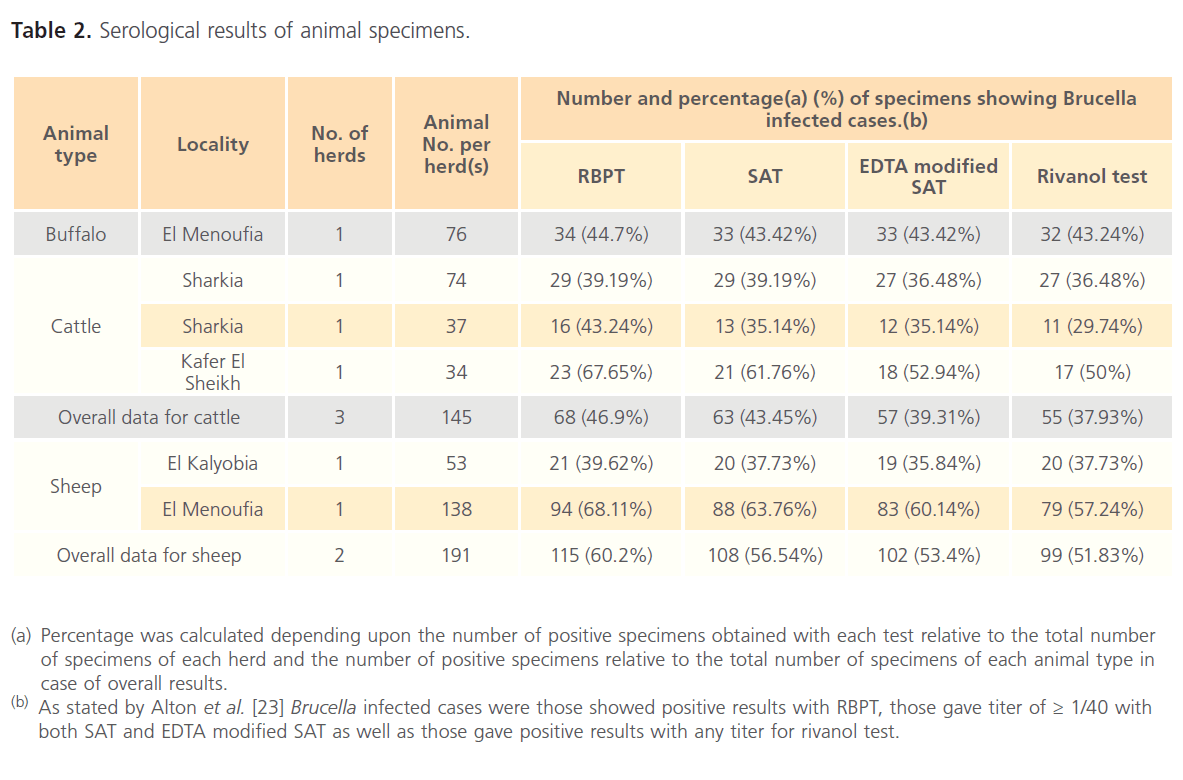 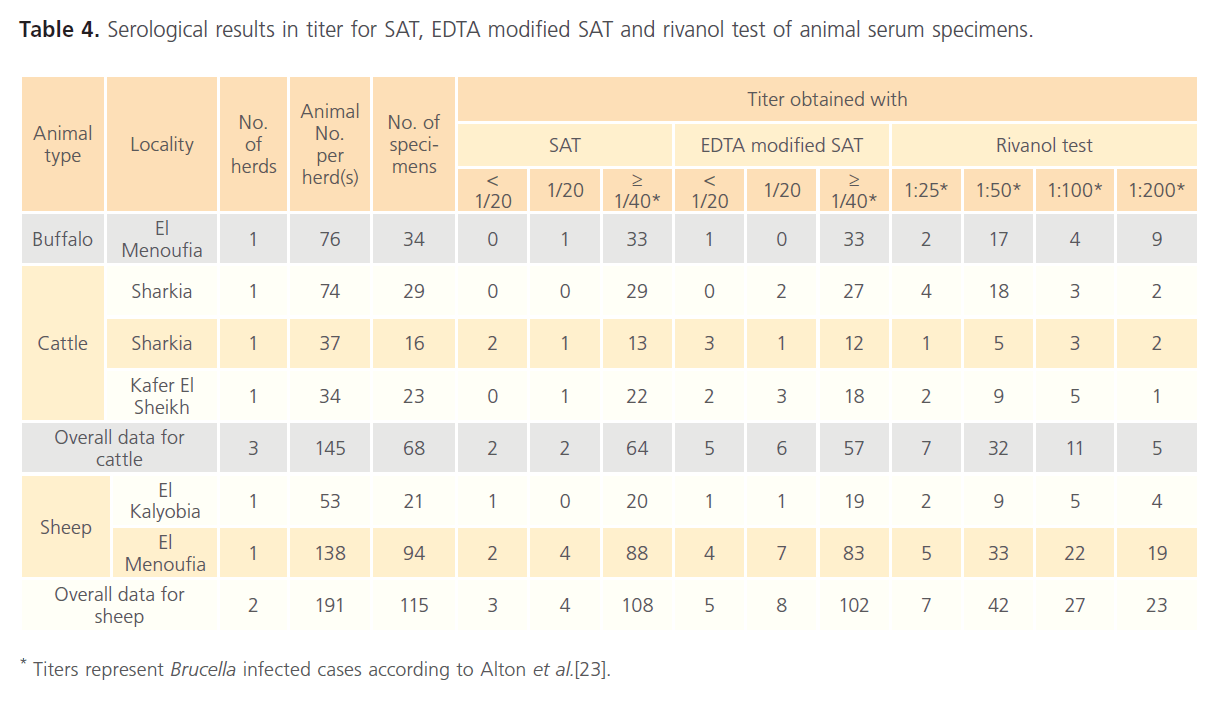 The serological diagnosis showed high prevalence of human brucellosis among suspicious human patients. The high prevalence of human brucellosis in this study compared to that reported by Fouad et al. [25] (26%) and Refai [22] (11%) was due to that the patients involved in this study were selected based on clinical evidence and/or personal history for brucellosis. However, 58% seropositive cases were recorded between family members of infected cases in Saudi families [26] and 84.9% prevalence was reported by Nimri [27]. In addition, Kazemi et al. [28] reported 80.76% seropositive individuals among suspicious human patients.

The results revealed that the number of positive reactions with rivanol test were found to be < EDTA modified SAT < SAT < RBPT. The high prevalence rate obtained with RBPT may be attributed to the high sensitivity and low specificity of the test. RBPT is mainly used for screening purposes which is rapid, simple and sensitive test but has low specificity and is usually followed by one of more specific confirmatory assays [30]. Several serological assays have been developed to diagnose brucellosis including SAT which stills the most reliable method [39]. Gall and Nielsen [40] reported that SAT had higher specificity (95.7%) but lower sensitivity (75.9%) than RBPT which had sensitivity and specificity of 81.2% and 86.3%, respectively. Thus, in the present study, sera that gave positive results with RBPT were retested using the more specific test (SAT). On the other hand, false-positive reactions can also be seen in the SAT and they occasionally result from cross-reactions with antibodies to Salmonella spp., Yersinia spp., Vibrio cholera, Francisella tularensis or Escherichia coli O:157 [41] resulting in doubtful reactions (with titer of 1/80 or 1/20 for clinical and animal specimens, respectively). Macmillan and Cockrem [24] stated that agglutination reaction was sufficiently affected by the action of EDTA. It was reported that non specific reactions with Brucella could be reduced by addition of EDTA [42, 43]. Thus, EDTA modified SAT showed less positive reactions than that obtained with SAT; however, doubtful reactions could also be observed for EDTA modified SAT. Rivanol test is useful in detection of chronic cases that mainly contain IgG. The rivanol test detects principally IgG1, and to a lesser extent IgG2, because initial treatment of sera with rivanol solution removes IgM by precipitation, reduces the reactivity of IgG2 and promotes the reactivity of IgG1. This gives the rivanol test low sensitivity but high specificity [44]. Thus, rivanol test showed the least number of positive reactions. In conclusion, the results showed that: (i) the real picture of brucellosis surveillance among human cannot be reflected using single serodiagnostic test, (ii) In comparison to human, serodiagnosis of Brucella among animals is less dependent on test type and such dependency took the order sheep > cattle > buffalo, (iii) serodiagnosis of Brucella among buffalo had nearly no dependency on test type.