Objectives: In the present study, effort has been made to describe a case of multiple splenic abscesses and abdominal lymphadenopathy in an immunocompetent child with cat-scratch disease (CSD).

Clinical Presentation and Intervention: The patient presented with fever, abdominal pain, nausea and weakness. The patient failed to respond to treatment with multiple regimens, including broad-spectrum antibiotics. However, there was a dramatic improvement in her condition after splenectomy was performed.

Conclusion: To the best of our knowledge this represents the first case of CSD being reported in Kuwait.

Cat scratch disease (CSD) is a benign, self-limiting disease in immunocompetent children, caused by B. henselae [1]. The organism is commonly found in the blood of cats and other felids, which are considered as the reservoir hosts [1,2]. The transmission to humans occurs via cat saliva or the scratch of a cat. Earlier studies indicated that CSD was largely a disease of children with 54% to 87% of patients being under 18 years of age. However, recent studies have suggested that CSD may be more common in adults than previously recognized [3]. The pathological response to Bartonella species depends substantially on the immune status of the infected host resulting in granulomatous and suppurative infection in immunocompetent individuals, as compared with vasoproliferative response in immunocompromised patients [2].

Common clinical manifestations of infection with B. henselae are fever with localized lymphadenopathy, prolonged fever (>2 weeks) and hepatosplenic symptoms. Among other less common clinical forms are ocular, neurologic, dermatologic, hematologic, orthopedic, cardiac, renal and pulmonary manifestations [3]. However, laboratory diagnosis of CSD is difficult, as primary isolation of Bartonella species on blood agar requires prolonged incubation [1]. Other diagnostic methods include serology, molecular techniques and histopathologic examination of affected tissues [4]. CSD typically does not respond to antibiotic therapy, although numerous reports have evaluated the effectiveness of many antimicrobial agents for the treatment of typical, uncomplicated CSD [5].

Human infections due to Bartonella species are now being recognized as emerging diseases. Therefore, this study tries to describe a case report on diagnosis of the first CSD in an apparently healthy child in Kuwait, to the best of our knowledge.

A previously healthy, 14-year-old Kuwaiti girl was admitted to the hospital with fever, abdominal pain, nausea and generalized weakness. She had arrived from a month-long trip to Egypt five days prior to medical presentation. On physical examination, the patient looked ill and had an oral temperature of 40°C with abdominal tenderness and guarding but liver and spleen were not palpable.

Urinalysis showed presence of RBC and WBC but urine culture was negative. Findings related to other systemic examinations revealed no abnormality. A clinical diagnosis of appendicitis was made, therapy with piperacillin-tazobactam (PIP/TAZ) and metronidazole was initiated and appendicectomy was performed. However, the appendix did not appear inflamed and the patient continued to run high grade fever (>40°C) postsurgery and no clinical response was observed even after 48 h. Although enlarged abdominal lymph nodes were visualized during the procedure of appendicectomy, none was removed during surgery for histopathologic examination. Computerized tomography (CT) of the abdomen revealed mesenteric and paraaortic lymphadenopathy and multiple splenic lesions (Figure 1). A suspicion of enteric fever prompted replacing PIP/TAZ with ciprofloxacin. Repeated blood cultures as well as serological tests for brucellosis, enteric fever, and infectious mononucleosis were negative. Since the patient failed to respond to antibiotic therapy, blind anti-tuberculous treatment was added to the regimen. After 10 days of treatment with multiple antimicrobial agents and no signs of defervescence, Pet-CT scan (Figure 2) was done, which showed similar finding as previous CT and raised the possibilities of fungal lymphadenitis. Anti-fungal therapy with voriconazole was commenced but the patient’s clinical condition did not improve. Finally, following four weeks of failed conservative treatment, splenectomy was performed, which resulted in a dramatic improvement in the condition of the patient. Microbial growth was negative for the patient’s specimen from the infected spleen cultured on 5% sheep blood agar plate and incubated at 370C for 3 weeks. 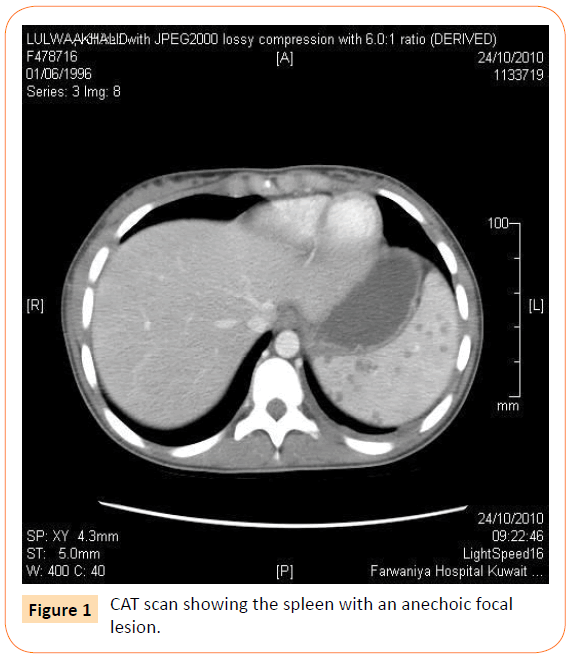 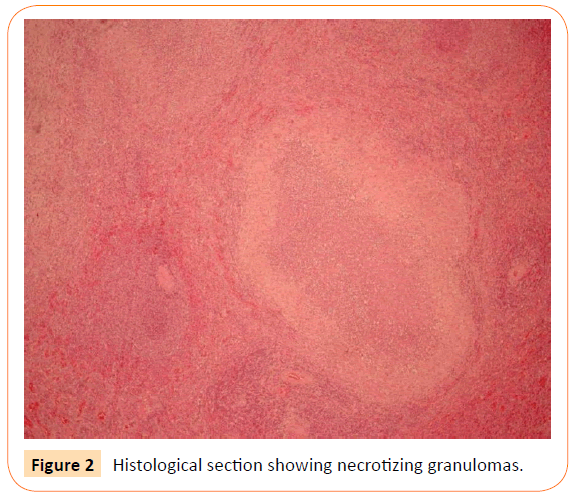 The gross pathology of the spleen showed multiple abscesses and histopathology (using haematoxylin-eosin and Warthin-Starry stains) report (Figure 2) concluded multiple splenic granulomas with a picture suggestive of CSD. A serum sample was sent to Synlab, Leinfelden for determination of antibody levels against B. henselae. The result indicated IgG < 1:64 and IgM <1:20 by indirect fluorescent antibody test. A repeat of the test 3 weeks later also proved negative. History of contact with cats was elicited from the patient and she admitted playing with kittens during her stay in Egypt. Immunological status of the patient was found to be normal.

Currently, 21 species of the genus Bartonella (facultative intracellular bacilli) are recognized, which are considered to be emerging infectious agents and cause disparate clinical conditions in humans [6]. CSD, caused by Bartonella henselae and B. clarridgeiae, is a benign, self-limiting disease in immunocompetent children with history of contact with kittens and cats [1]. The patient apparently acquired the infection while in Egypt. Since her symptoms were not that of “typical CSD”, she was diagnosed as a case of acute appendicitis. Bartonella infection can present with hepatospenic disease involving liver and/or spleen with most patients presenting with hepatomegaly, splenomegaly, or both. Our patient did not present with these signs on physical examination at the time of hospitalization.

Diagnosing isolated splenic CSD can prove to be very challenging. Other than tests that are directed at the isolation and/or identification of the aetiologic organism in the clinical specimens, laboratory findings of Bartonella infection are often nonspecific, resulting in normal or mildly elevated blood leukocytes, normal or elevated ESR, and normal, elevated, or diminished platelet counts [4]. Culturing Bartonella species in the laboratory is difficult, as it requires 2- to 6- week incubation on blood agar for primary isolation from clinical specimens. Histopathologic examination of affected tissues showing granuloma formation with microabscesses by conventional staining methods and identifying the organism in Warthin-Starry silver stain are suggestive of CSD [8].

Abdominal imaging has been found to be an important tool for diagnosing hepatosplenic Bartonella infection with 68% of the patients showing micro-abscesses of both the liver and spleen [9]. A more practical means of laboratory diagnosis is serology, which avoids invasive sample collection, specialized equipment and prolonged incubation. The two serologic methods employed are IFA and enzyme immunoassay (EIA), although the former is more frequently used [8]. The disadvantages of serologic methods include variable sensitivity and specificity, antigen used, test procedures and the cut-off used [4].

Based on the diagnostic criteria suggested by Margileth, our patient qualifies for the diagnosis of CSD as she provided (1) history of contact with the cats; (2) sterile pus and tissue cultures from the spleen; (3) negative serology for other common causes of lymphadenopathy; and (4) splenic histology showing granulomatous inflammation consistent with CSD. With regards to treatment, majority of CSD cases resolve spontaneously and do not require antibiotic treatment [7]. In severe cases or immunocompromised individuals the recommended treatment includes doxycycline, rifampicinn, azithromycin, gentamicin, tetracycline or erythromycin. Our patient received multiple antibiotic courses including rifampicin, which has shown a reasonably high success according to the literature, and yet failed to respond [9].

To the best of our knowledge this is the first case of CSD being reported from Kuwait. We recommend considering CSD in the differential diagnosis in children presenting with PUO, lymphadenopathy and splenic involvement. Despite several antibiotic courses, which included those recommended in CSD our patient showed defervescence only after splenectomy was performed.