A Systematic Review and Meta-Analysis of the Proportion and Antimicrobial Susceptibility Pattern of Escherichia coli O157:H7 from Different Human Foods in Ethiopia

Copyright: © 2020 Engda T, et al. This is an open-access article distributed under the terms of the Creative Commons Attribution License, which permits unrestricted use, distribution, and reproduction in any medium, provided the original author and source are credited.

Shiga-toxin producing Escherichia coli (STEC) is recognized as an important foodborne zoonotic pathogen. It causes watery diarrhea which progresses to bloody stools with ulcerations of the bowel. This can cause severe life-threatening illness called hemolytic-uremic syndrome (HUS) which manifests with the following symptoms; hemolytic anemia, thrombocytopenia and renal failure [1]. Although more than 400 different serotypes of STEC have been isolated, O157:H7 is the serotype that has been most studied since it has been commonly associated with the development of severe human illness [2]. Recent epidemiological studies have revealed other STEC called non-O157 sero-types, to be highly associated with human disease [3]. Ruminants such as cattle, sheep, goats, and deer are considered significant reservoirs of STEC, while other animals have been found infected [4-6].

Foods can be used as a sample to detect Escherichia coli O157:H7. But there is no single technique that can be used to isolate Escherichia coli O157:H7 serotypes [10,11]. Thus, the first step for STEC detection is to enrich the sample to be analyzed and then using different techniques like, immune magnetic separation, culturing by use of sorbitol MacConkey agar containing cefixime and tellurite, latex agglutination techniques and genome characterization by PCR [12,13].

Human acquired E.coli o157:H7 infection through contaminated foods, contact with animal reservoirs and environmental conditions [14-16]. In accordance with several surveys, contaminated foods are the main factors in spreading of E.coli O157:H7infections [17-20]. So, the epidemiology of Escherichia coli O157:H7 in foods is so substantial to emphasize effective prevention and control strategies. Therefore, the aim of this meta-analysis was to summarize available data and to determine pooled prevalence of Escherichia coli O157:H7 in foods and its antibiotic resistance in Ethiopia by conducting a systematic review and metaanalysis.

The study was carried out according to the guideline of PRISMA (Preferred Reporting Items for Systematic Reviews and Meta-analyses) and Meta-analysis of Observational Studies in Epidemiology (MOOSE) statements were followed in reviewing. The PRISMA check list was used to ensure inclusion of relevant information. The study populations were different human foods and study designs was cross-sectional studies. Frequency and meta analyses were performed by sampling populations and methodological features of the studies [17-19]. The outcome of interest were prevalence and antimicrobial susceptibility of Escherichia coli O157:H7.

A study was eligible if its objective was prevalence and/or antimicrobial susceptibility pattern of Escherichia coli O157:H7, cross sectional study design with sample size, human food as sample type with microbiological methods, and it was published in English.

Combination of Boolean operators (AND/OR),Medical subject Heading (MeSH) and predefined keywords, including “ Proportion ” , “ Antimicrobial susceptibility ” , “ Shiga toxin producing Escherichia coli ” , “ Escherichia coli O157:H7 ” , “meat”, “milk”, “cheese”, “carcasses swab”, “filleted fish swab”, “water” and “Ethiopia” was used to search data in PubMed, google scholar, google from February 2018 to April 2019. Then, we were independently screened and evaluated the full texts of the articles following the first duplicated and blinded screening because of titles and abstracts for relevance to the study objectives. Disagreements and inconsistencies among authors were resolved by consensus after discussion. Study screening strategy and exclusion reasons are presented in Figure 1. From each eligible study, first author, year of publication, study area, year of study, sample size, number of Escherichia coli O157:H7, food type examined, diagnosis method, article title, and year of publication were extracted from the eligible studies. The proportion of Escherichia coli O157:H7 was calculated by using the number of isolates as denominators.

Quality criteria were developed before starting the review of full papers by us. The inclusion criteria were including an observational study that reports proportion of the organism in different foods of Ethiopia, studies that contain diagnostic methods that employed one of the diagnostic approaches. Articles that met the above criteria were considered for the final meta-analysis and systematic review. Titles were checked twice in both excluded and included databases of the Mendeley reference manager before the start of the data extraction process to avoid missing a valuable report independently.

Microsoft Excel, 2013 and STATA-14 were used to analyze the data following an initial extraction and to perform metaanalyses. We calculate proportion of Escherichia coli O157:H7 and its antibiotic resistance rate from collected data. Then, pooled estimates with 95% confidence intervals. Due to the natures of studies, substantial heterogeneity was expected, and a random-effects meta-analysis was done with the estimate of heterogeneity being taken from an inversevariance model [20-23]. Publication bias was assessed by visual inspection of the funnel plot. But it confirmed by Eggers test. Subgroup analysis was also conducted by type of food sample and diagnosis method used. The contributing factors for heterogeneity was investigated by meta-regression [24].

Total search was 410 reports. Three hundred and sixteen reports were excluded because of the titles were not relevant to the outcomes of interests. Of the screened articles, twentynine were excluded due to data inconsistency, lack of separate information on the number of samples taken. A total of 21 studies were eligible for quantitative syntheses (Figure 1).

Characteristics of the eligible studies

The pooled proportion of Escherichia coli O157:H7 was 0.05 (95% CI, 0.04 to 0.07; P=0.00) with high level of heterogeneity by random model methods (I2 =64.18%, P =0.00) [26]. Since, the included studies had been conducted in different sample types, unrepresentative sample size, and unreliable diagnostic methods, together with the lack of data on other required variables could have an effect on the heterogeneity of the included studies (Figure 2).

Figure 2: Descriptive distribution of STEC in the study area

Due to the expected variation between studies, randomeffects meta-analyses were carried out using the total sample size and number of positives. The meta-analysis indicated that between-study variability was high (heterogeneity I2=64.18% with Heterogeneity chi-square 55.83%, degree of freedom 20 and a P value of 0.00). Individual study prevalence estimates ranged from 0.02 to 0.1 with the overall random pooled proportion of 0.05 (95% CI, 0.04 to 0.07). Figure 2 presents the Forest Plot derived from the meta-analysis [28-30].

Some group of foods (cow raw milk, meat, carcass swab) analysis showed high heterogeneity. However, some foods type (Filleted fish swab, cheese & water) were not pooled because of the number and size of studies (Figure 3). 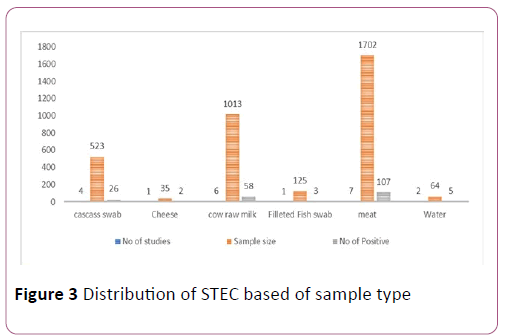 Figure 3: Distribution of STEC based of sample type

Meta-regression analysis was done for each variable included in the study separately. The variables included were sample size as a continuous and categorized variable, sample types examined, and diagnosis method used as a categorical variable. Continuous variable (sample size) was subjected to assessment to see a linear relationship between the independent effect size. Those variables, Diagnosis method with a p-values <0.1 (0.030) were used had significant value for estimated value (Figure 4). 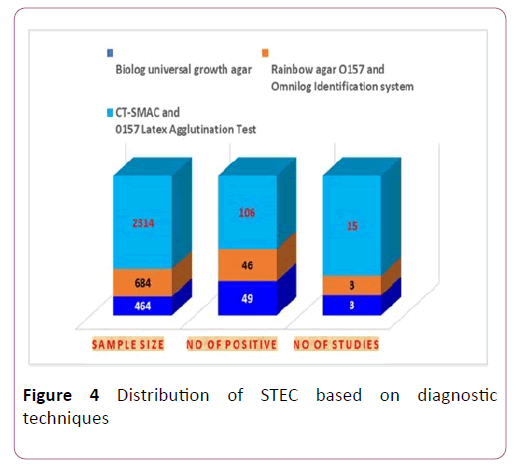 Figure 4: Distribution of STEC based on diagnostic techniques

It is one source of heterogeneity. And, it can be assessed by funnel plot observation and Egger ’ s test. In funnel plot observation, there was indication of publication bias because some data was out of symmetric. But in egger test, there was no a publication bias with a p-value of 0.068, it is greater than 0.05. This is because of small sample size.

Seventeen studies were used to extract data for the antibiotic resistance profile of Escherichia coli O157:H7 isolates from those studies, ten different type of antibiotics were used (Figure 5). The pooled resistance rates of Escherichia coli O157:H7 for each tested antibiotic has been presented and therefore, high resistant rates were observed in Chloramphenicol, Tetracycline, Erythromycin and Streptomycin, with a pooled resistance ratio of 79.72, 63.44, 52.65, and 50.77%, respectively (Figure 6). 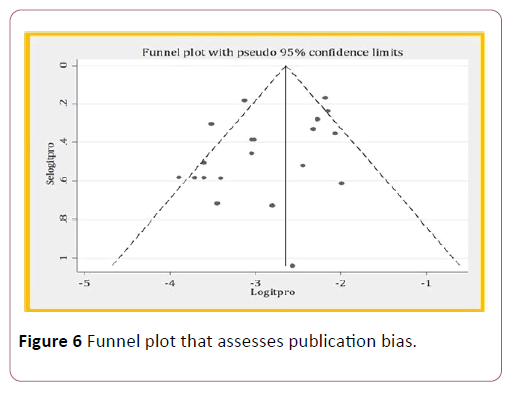 Now a day, foodborne diseases have become one of the important issues all over the world [36]. Due to lack of awareness STEC O157:H7 transmission, this problem is worse in developing countries [36,37]. One of major pathogenic microorganisms that frequently have been associated with food borne disease is Escherichia coli O157:H7. In humans this pathogen causes asymptomatic infection to severe diarrhea and hemolytic-uremic syndrome (HUS) [37]. Human infections with E. coli O157:H7 have been mostly associated with the consumption of contaminated or under cooked foods [38].

To understand the source and means of transmission of Escherichia coli O157:H7, there should be need pooled report. So, this report was done from the analysis of data obtained through a systematic review of scientific publications on the organism between 2008 to 2018. Literature was very heterogeneous, unrepresentative sample size and type of diagnostic methods. Lack of data on the required variables and other factors reduced the number of studies to be included in the final meta-analysis substantially. The final systematic review and meta-analyses were done in 21 studies for proportion and of which 17 studies for Antimicrobial susceptibility testing.

According to this meta-analysis, the overall estimation of proportion of Shiga toxin producing Escherichia coli O157:H7 in food in Ethiopia was 0.05 (95% CI, 0.04 to 0.07%). This is comparable with meta-analysis studies conducted in Eastern Ethiopia. However, this finding is relatively higher than from reports indicated in weastern and southern Ethiopia. But lower in compare to Central, Northern, South east and South west. It is well known that risk factors associated with food borne illness causing strains are comparatively higher in developing countries [37,38].

The overall proportion of the organism in meat was half of the pooled proportion of Shiga toxin producing E. coli O157:H7, meaning raw meat consumption may result in tightening Shiga toxin producing Escherichia coli O157:H7 infections. Then milk, carcass swab, water, filleted fish swab and cheese accordingly to the degree of the organism present in the food stuff. This high level of occurrence can be attributed to contamination with cattle feces during handling of food because cattle are the reservoirs of the organism [39].

Based on diagnostic techniques used, the proportion of the organism was lower in biology universal growth agar and Rainbow agar O157. However, it was higher in CT-SMAC and O157 latex reagent techniques. This can be attributed to biochemical test which may only estimate at species level while advanced diagnosis techniques can identify the pathogenic strain. These methods should be further confirmed by more advanced methods of examination to estimate STEC. One of the reasons for the low level of occurrence of the organism in foods can be poor diagnosis method used [40].

Moreover, based on the data have been obtained from seventeen published articles; Escherichia coli O157:H7 strains showed extremely high resistance rate in Chloramphenicol, Tetracycline, Erythromycin and Streptomycin, with a pooled resistance ratio of 79.72, 63.44, 52.65, and 50.77%, respectively.

This systematic review and meta-analysis showed that the level of Escherichia coli O157:H7 in foods was low in comparison to other studies. This is because of the type of diagnostic techniques. However, it indicates of the probability of food contamination by Escherichia coli O157:H7. Therefore, the concerned bodies should have to prepare and apply different strategic plans to reduce the impact of the organism. WHO should undergo scientific assessments to control STEC in food and the findings will serve as the basis for international food standards and guidelines? Also, it should promote the strengthening of food safety systems by promoting good manufacturing practices and educating retailers and consumers about appropriate food handling and avoiding contamination.

Ethical approval and consent to participate

We have meta-analyzed evidences obtained from studies that were particularly conducted in Ethiopia. Therefore, this study did not require approval from ethical committee.

Availability of data and materials

All data generated or analyzed during this study were included in this article.

The Authors declare that they have no competing interest

No one was responsible for funding of this research

We are grateful to thank the Department of Medical Microbiology, School of Biomedical and Laboratory Sciences, College of Medicine and Health Sciences, University of Gondar for giving this opportunity to undergo this study.