6Laboratory of Microbiology and Immunology of Infection, Institute for Molecular and Cell Biology (IBMC), Porto, Portugal.

ackground: Eradicating tuberculosis (TB) in European countries with high incidence, such as Portugal, rely to a great extent on the ability to perform early accurate diagnosis. For the first time, the diagnostic value of two serologic tests, TB STAT-PAK II and MAPIA, was evaluated for rapid tuberculosis detection in a Portuguese cohort. Materials and Methods: A multicentre case-control study was performed on individuals who had been followed up for TB. Serum was collected from a total of 157 patients divided in: 1) control group with 32 healthy individuals 2) control group with 30 patients with pulmonary diseases other than TB; 3) patients with active TB on anti-TB medication for less than 2 weeks (43 patients), for 1 to 2 months (32 patients) or for more than 6 months (28 patients); 4) 25 patients with active TB co-infected with human immunodeficiency virus (HIV); 5) 29 recently exposed individuals with probable latent TB infection. Sera were tested for the presence of specific mycobacteria antibodies using the TB STAT-PAK II and MAPIA tests and compared with sputum smear microscopy information. Findings: Both of the serological methods showed high specificity. However the two methods had sub-optimal sensitivity, especially in HIV-co-infected patients. Combination of the antibody assays with sputum smear microscopy increased the overall sensitivity of rapid diagnosis. Conclusions: The use of point-of-care serodiagnostic tests may improve early detection of active tuberculosis and contribute for better control programs.

Tuberculosis (TB) represents an important Public Health problem worldwide which was declared as an emergency by WHO in 2008 [1]. In Portugal, TB incidence is decreasing throughout the last 15 years (from 66.4 to 24.1 per 100,000 individuals from 1985 to 2010). However, it still remains the highest among other Western European countries [2].

Accurate TB diagnosis requires laboratory confirmation. Mycobacterial culture represents the only definitive diagnostic method. However, this approach lacks sensitivity for paucibacillary clinical samples. It also requires invasive procedures for the diagnosis of extra-pulmonary TB. The delay of the culture results, which can reach up to 8 weeks, is an additional disadvantage. Sputum smear microscopy is faster but requires multiple patient visits, and the sensitivity is lower than the culture method particularly in immunocompromised patients [3]. The development of novel serodiagnostic tools to improve TB diagnosis is therefore considered one of the top priorities in TB management [4]. Since the use of Mycobacterium tuberculosis specific antigens renders serodiagnostic tests highly specific [5], we have evaluated in the present work the Chembio TB STAT-PAK II kit [6] and the multiantigen print immunoassay (MAPIA) [7] to determine whether these tests could complement the current TB diagnostic methods in Portugal.

We performed a multicentre case-control study with individuals followed up in four medical institutions (a TB outpatient clinic, two Hospitals, and a Community Health Centre). All individuals involved in the study were adults Portugal residents. The study was approved by the Hospital de S. João, Porto, Ethics Board. All individuals have signed an informed consent; data was handled anonymously. 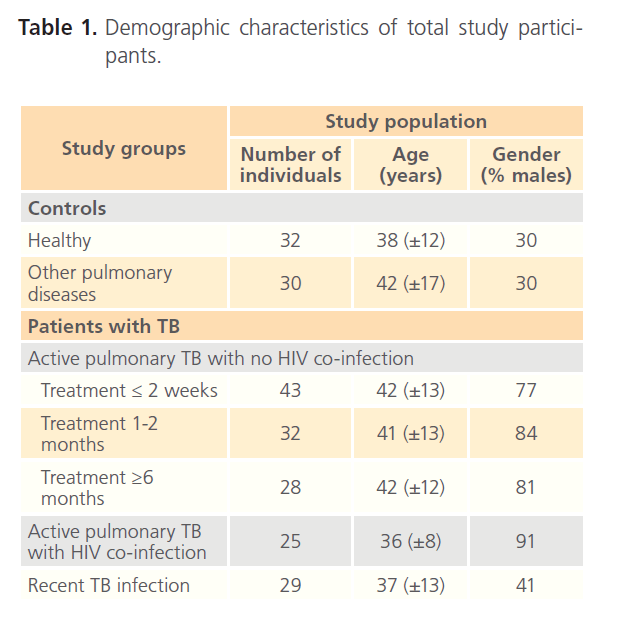 Sera were tested for the presence of specific IgG antibodies using TB STAT-PAK II and MAPIA (both from Chembio Diagnostic Systems) performed in accordance with manufacturer’s instructions, as previously described [8]. TB STAT-PAK II is a ready-to-use disposable plastic device based on colored latex lateral-flow technology containing a cocktail of selected M. tuberculosis antigens including ESAT-6, CFP10 and MPB83. Results were read by two independent operators. Any visible band in the test area, in addition to the control line, was considered a positive result [6]. The MAPIA test entails the application of antigens on nitrocellulose membranes, by microaerolization, followed by antibody detection using standard chromogenic immunodevelopment. In this assay, sera was tested against a panel of M. tuberculosis recombinant antigens (ESAT-6, CFP10, MPT59, MPT64, MPT70, MTB83, Acr1, 38 kDa, ESAR6/CFP10 and Acr1/MPB83) [7].

The two serodiagnostic tests, TB STAT-PAK II and MAPIA, showed high diagnostic specificities when tested on healthy individuals and on patients with other pulmonary diseases (Table 2). The TB STAT-PAK II sensitivity, compared to the gold standard microbiology culture, varied within the study groups from 59% in HIV-negative TB patients at 1 to 2 months of treatment to 16% in TB/HIV patients. The MAPIA test was more sensitive in patients on less than 2 weeks of treatment in comparison to the TB STAT-PAK II (54% vs. 27%) and less sensitive for TB/HIV patients (8% vs. 16%). No, or very low antibody levels, were detected in recently infected individuals (14% sensitivity by TB STAT-PAK II and 0% by MAPIA). 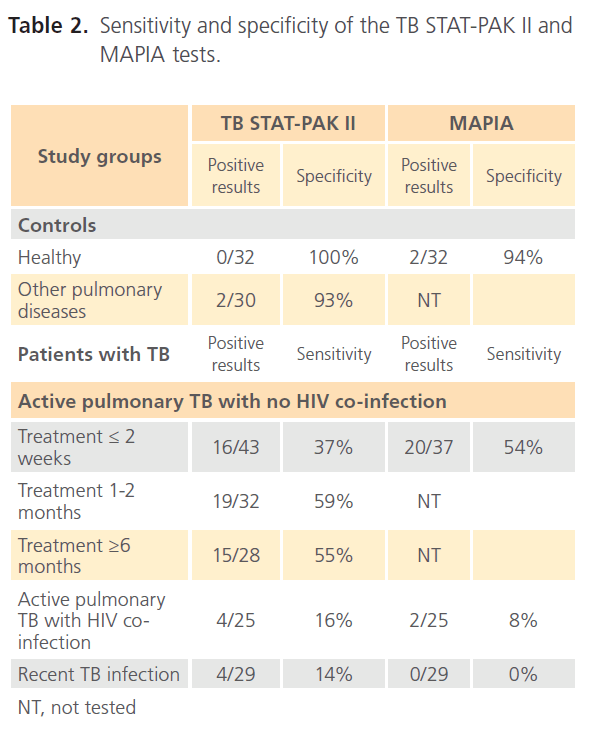 Table 2: Sensitivity and specificity of the TB STAT-PAK II and MAPIA tests.

Despite sputum smear microscopy (upon Ziehl-Neelsen staining) is a hallmark diagnostic test for TB, it only detected about 76% of the cases that were positive by culture. However, when testing the same patients with the serodiagnostic tests an additional 6% and 13% of positive cases were detected using the TB-STAT PAK II and MAPIA, respectively, for HIVnegative TB patients (Figure 1). 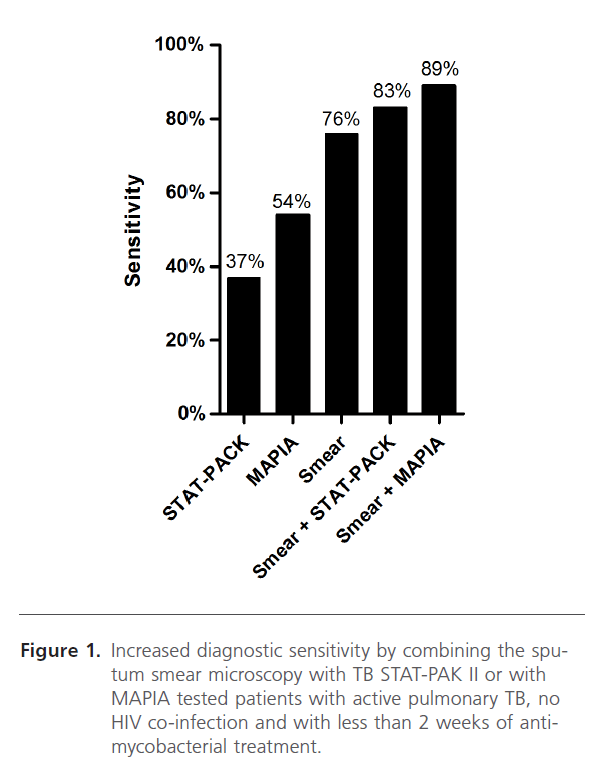 Figure 1: Increased diagnostic sensitivity by combining the sputum smear microscopy with TB STAT-PAK II or with MAPIA tested patients with active pulmonary TB, no HIV co-infection and with less than 2 weeks of antimycobacterial treatment.

This study is the first to be performed on the usefulness of serodiagnostic tests for the rapid detection of TB in a Portuguese population. It shows that fast serodiagnostic tests, when combined with sputum smear microscopy, may improve detection of active TB. This may be of particular importance in Portugal and other countries where reducing TB incidence depends mostly on the ability to perform early diagnosis. The two serodiagnostic tests evaluated showed high specificity but neither of the tests alone provided satisfactory sensitivity. For HIV-negative TB patients, sensitivity ranged between 16%-59% using the TB STAT-PAK II test, depending on the duration of anti-mycobacterial therapy. In fact Azzurri et al. have shown that anti-bacillary treatment affect the levels of specific antibodies providing evidence of serological markers of TB and response to treatment [9]. Our data thus suggests that the TB STAT-PAK II test may be a helpful approach to monitor the effectiveness of TB therapy. Unfortunately, the vast majority of the recently infected asymptomatic contacts were negative for both methods which sustain that serodiagnosis is most suitable to identify active TB patients [10].

Despite the low sensitivity of these serodiagnostic tests, when combined with sputum smear microscopy, the most commonly used point-of-care diagnostic procedure, the overall sensitivity increases to 83% and 89% for TB STAT-PACK II and MAPIA, respectively. Therefore, if serodiagnosis becomes a standard procedure in sputum smear negative TB-suspected individuals, up to 13% additional TB cases might be identified shortly after suspicion and before obtaining microbiology culture results, presumably leading to a decrease in the transmission of the disease.

Further efforts to improve serological tests for TB are urgently needed, since the benefits of emerging rapid point-of-care diagnostics tools are evident. The potential of this approach has been recently demonstrated for wildlife species [8]. Future studies, in addition to the conventional evaluation of single test sensitivity and specificity, should develop improved diagnostic algorithms and determine the relative contributions of newly developed assays to the overall clinical decision making process.

The authors are grateful to Peter Andersen, James McNair, and Raymond Houghton for kindly providing recombinant antigens used in this study. The project was supported by SBIR Grant Number AI043781 from the NIH. The content is solely the responsibility of the authors and does not necessarily represent the official views of the NIH.